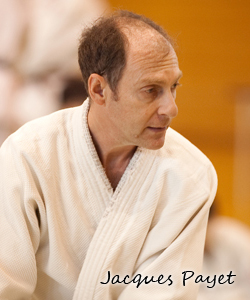 Russian version of interview you can see here »

Payet Sensei, thank you very much for having agreed to be interviewed. This is a great honor for us! There are a lot of people in Russia who practice Yoshinkan Aikido and they have many questions, arising in the process of training. It would be very interesting for them to take the opinion of a person with such a great experience like yours.

Actually, the examination program in Yoshinkan Aikido doesn’t include much work with traditional weapons. Do you practice such work in your Dojo and which results can it help to achieve? Should the work with weapons be regarded as only an accessory element?

Payet Sensei
Everybody has different opinion, every teacher has different opinion. For me I think it’s very important to understand the principal of aikido through weapon. Because aikido comes from the sword. So in my dojo once a week we practice bokken and jo. In relationship to aikido training we train to understand basic technique and basic principal of Yoshinkan aikido through the bokken and through the jo. To understand things like extension, distance (Mai) and also to keep a sense of strong commitment and intention because with a weapon if we are halfhearted in our training we get hit. it’s very good to practice bokken or jo.

The Instrucror Examination in Yoshinkan Aikido includes Goshin waza as a required element of the program. Can these techniques be applied for self-defense?

Payet Sensei
Personally I think that it should be changed because the self-defense which is included in instructor’s program now comes from the police. And in Japan the police can not be allowed to hurt. They can not hurt, they can not punch, they can not kick. So because if they do punch or kick they get sued. It’s not applicable to general public. So I think we should  change. Either adapt or take it off. Personally me when I test my students I don’t do goshin waza. Because it’s for the police and  it’s not realistic for general public.

Goshin waza techniques performed by intended instructors are very much different from each other. Sometimes they look like fight or some Judo techniques. Is there any study material for Goshin waza?

Payet Sensei
So that’s why as I said goshin waza is for the police in the need of Yoshinkan. So that’s why each country is different. Some country like maybe Russia or East Europe are basically more danger so people want to know how to defend themselves and there is more need. So for goshin waza… I think there is a need to develop a program which fit a specific country. But in Europe or in America some people are  interested in goshin waza, but most people see Aikido as a way of life , a system to stay healthy improve themselves in a safe  environment, and like its non-competitive and non-aggressive  philosophy . So Aikido and self-defense Goshinjutsu are tought generally separately. So that’s why I think instructor has to develop his own program. You can use Yoshinkan as a base but there is a need to incorporate other arts and develop a specific system because Yoshinkan is just for the police.
Senshusey course in the Hombu when it is trained the police into the senshusey. But me here, my instructor course here, I don’t do or if I do I do special goshin jutsu more practical.

What role did Terada sensei play in Yoshinkan Aikido establishment?

Payet Sensei
I think in the beginning Terada Sensei and Shioda Sensei were friends so they started the organization together and I think he was instrumental at the beginning. After that they hold their own separate organization but stayed very close. Terada Sensei did  his own style because it was more into mixed judo and other martial arts into aikido and he developed his own style. He was not Shioda’s sensei student. They just working together. Seiseikai was very different from the Yoshinkan. Even though Terada Sensei was part of Yoshinkan he was very too separate group so that’s why technical is very different. And the idea everything is very different. When I was at the Honbu Terada Sensei  would  come to the Honbu dojo only for demonstration, grading or special event but was not teaching there. I think we can say that Terada sensei was a Yoshinkan Shihan but his style was very different both in its technics and in his approach, but this is normal because Terada sensei and Shioda sensei had a completely different experience . Terada sensei was not student of Ueshiba Sensei. He was more close to his  son Kishimaru  Sensei. He studied judo and something like that. But Shioda Sensei was only Ueshiba’s Sensei student.

Aikido techniques include Yonkajo osae control, and different masters perform it in different ways. Some of them grab Uke’s arm closely to his wrist in order to intensify pain effect, others do it upwards of the wrist for the better control of elbow and mainly focus on kuzushi. In your opinion, what is more important in this technique: pain control or kuzushi?


Payet Sensei
I think it depend on the level. At the beginning it’s impossible to understand kuzushi. So beginners have to learn the pressure point. I think for beginners it’s good a little pain as an experience pain and experience how it works. And after you become stronger when you become black belt the pain doesn’t work very well. So that’s why we start to work on kuzushi. We can’t say one is good or not. It’s a process.

Is it possible to perform Yonkajo only by one hand in case if Uke makes resistance (sometimes is demonstrated in exhibition performances)?

Payet Sensei
Yonkajo for me it’s not a technique it’s a tool it’s a way to train your body. To find a way where you don’t use strength. You relax and use your hip power and get a connection with your partner and little by little you try to train to see even if somebody try to resist you can do it without strength. It’s not very technic. Or if it doesn’t work you just punch him (laughing). You will always find somebody when your technic doesn’t work. It’s not a science.

We head about some story about Takeda Sensei when he applied yonkajo to one unpolite Americans in the train, and another story when Gozo Shioda Sensei applied Yonkajo on bodyguard of Robert F. Kennedy.

Payet Sensei
Sometimes it’s doesn’t work. Because it’s not a goal. The goal is to learn, to work on your body. To develop another strength. It’s not just muscles. Gozo Shoina Sensei applied nikkajo and yonkajo too in that point. I don’t know he applied it with pain or without but it is worked. I think at the beginning Shioda Sensei was very painful. If you see an old video you can see that Shioda Sensei was very strong and painful. But after that little by little he got older and involved more balance and kuzushi. It’s a process. That’s way we can’t say pain is bad and kuzushi is good. It’s just a progression.

What is the history of falcon symbol in Yoshinkan Aikido? Where does the idea of using this bird as a logo come from?

What is the purpose of practicing Suwari waza kokyu ho 1-5? Where can the skills acquired due to these tecniques be applied afterwards?

Payet Sensei
That’s very important. I’ve heard that Ueshiba Sensei always finishes class with kokyuho. Not just one or two variants. Because at the beginning technics was not organized. You would teach every day difference things. There was no structured kihon. So it’s very difficult to follow. Shioda Sensei said that he felt that it was almost impossible for student to learn, to progress. Because Sensei was always changing. So he decided to structure. That’s why he made Yoshinkan, he made syllabus and separated ichi and ni when we pulling and pushing. And also broke down all technic and detailed so like kokyuho ichi, ni, san, shi, go. So it’s easy for student to understand. But I think personally that’s kokyuho is most important because it is the training to develop  the tanden. In Yoshinkan Kokyuryoku the focus of power is very important , breathing in focusing your tanden and breathing out when you throw build up rhythm , energy and focused power this is why we have to do a lot of kokyu-ho training.

In weightlifting before lifting the bar athlete breathes in, holds his breath and then only after dropping the bar he breathes out. We have listened a lot about the power of Kokyu ho as a basic principle in Aikido techniques. Does it have any direct relation with such physiological aspects as inhalation, exhalation, inspiratory and expiratory breath-holding during the performance of Aikido techniques? How can this principle be used in practice?

O-Sensei was a very religious man and practiced different kinds of esoterics. Did Yoshinkan Aikido take something from such practice?

Payet Sensei
No, because Shioda Sensei was not a religious person. He mentioned that Ueshiba sensei never forced his uchideshi to be religious so in his case he did not like so he did not practice.

What is the meaning of meditation in the beginning and in the end of training, when we sit in seiza and close our eyes?

Payet Sensei
I think it’s important to live in the moment so when you close your eyes at the beginning you have to forget what had happened during your day cut yourself off the everyday problems or concern you may have , from work or with your family.. You have to calm down and forget everything and focus on the training. It is the same in your approach to training, you must try to stay calm and forget the technic, forget everything. Just be empty and give yourself entirely to the practice. In Aikido it is not “training” which is a term used for sports or other physical activities , in Aikido it is “Keiko” which means doing something special to improve yourself , become a better person and the techniques are there to purify yourself according to Ueshiba sensei.

Thank you very much for this interesting interview!

Russian version of interview you can see here »